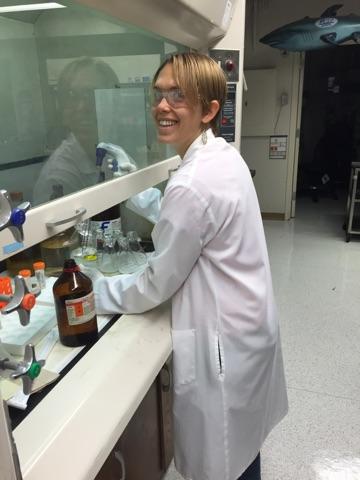 Department of Microbiology and Immunology

OGPS: What is your academic and research background?

Hagan: I completed my bachelors (2010) and masters (2012) at East Tennessee State University. There I studied bacterial iron acquisition systems known as siderophores in the lab of Dr. Ranjan Chakraborty. Siderophores are small molecules synthesized by bacteria to scavenge iron from their environments, such as during infections. Bacterial pathogens unable to make or import their siderophores are also unable to grow quickly enough to cause disease. My undergraduate thesis surveyed siderophore systems in methicillin-resistant and methicillin-sensitive strains of Staphylococcus aureus whereas my masters investigated the mechanism of action of a dedicated siderophore import protein in Escherichia coli. In 2012, I joined PIBS here at UM and joined Phil Hanna’s lab in the Department of Microbiology & Immunology. There I studied the Bacillus anthracis siderophore petrobactin, identifying an exporter and its role in facilitating sporulation. I defended in January 2018.

OGPS: How did you decide what you wanted to do in your science career?

Hagan:  Well, I haven’t decided. I spent my educational career within a single research field, primarily because that’s where my educational opportunities overlapped. I began graduate school with the intent of one day running a research laboratory but midway through my PhD I had a quarter-life crisis. After exploring my career options, I decided that I wanted to pursue science communication, a decision that prompted me to co-found the student-led science writing blog MiSciWriters and blog for the American Society for Microbiology (ASM). For the next stage of my career, I knew that a short post-doctoral fellowship in another research field would be valuable but the traditional post-doc options didn’t appeal to me. I was very fortunate to find a post-doc with ASM that had a perfect blending of both research and science communication. My long-term interest now is to use data to inform science communication practices.

OGPS: What are your current research initiatives?

Hagan: My work with the American Society for Microbiology is in their Journals Department under the Journals Director, Melissa Junior, and Journals Chair, Patrick Schloss. ASM publishes 13 different research journals and has a host of data regarding research published in their journals. I’ll be analyzing the data for trends in ASM publishing that may help ASM improve their publishing process, as well as to understand the publishing ecosystem in the field of microbiology. My first major project is to get a clear picture of gender parity across publishing levels from authors, to reviewers to editors. There is a host of literature indicating that the genders of reviewers and editors are rarely representative of the field. For instance, despite a near even split in the gender of ecology researchers, less than 20% of the editorial board are women. We want to know where the ASM journals lie in this regard, and how that has changed over time.

OGPS: What are your future goals?

OGPS: What accomplishment are you most proud of?

Hagan: The accomplishment I’m most proud of is proving a hypothesis to my graduate school mentor that he disagreed with. My research project was to look for the export protein of a Bacillus anthracis siderophore. After generating and screening tens of mutants for their ability to export the siderophore, I seemed no closer to finding the exporter. Reading literature, however, made me think it was possible that I already had. See, the colorimetric assay I used to screen, only detected part of the siderophore but didn’t tell me the state of the siderophore. My hypothesis was that by knocking out the exporter, the siderophore accumulated inside the cell, was then degraded and the fragments exported through a different system where they were being detected by the assay. My mentor wasn’t particularly keen to my hypothesis but when I walked in the evidence for siderophore fragments in the supernatant, he changed his mind. To posit a hypothesis for an observation, then design and execute experiments sufficient to prove it to a skeptical audience is one of my most proud accomplishments.

OGPS: What is one piece of advice you would give new Ph.D. students?

Hagan: Don’t pigeon-hole your research career. Remember that science is less about “what” you’ve done and more about how you decided to do it. In my opinion, becoming a scientist is not about techniques, it’s about teaching yourself a field, learning to ask questions, make hypotheses, and design experiments to test them. Those are highly transferable skills that will not only help you apply your Masters/PhD to whatever career path you choose, but also give you the freedom to switch fields and become cross-disciplinary, especially during your training (undergrad/graduate/post-doc).

OGPS: What do you like to do outside of the lab?

Hagan: Most of my time outside of lab is spent caring for, and playing with, my 18mo old son. We enjoy taking walks, going to the library, and checking out the local parks and museums. I also enjoy cooking, yoga, watching anime with my husband, and reading popular science and comic books.